An update ... and Spotted in The Netherlands

The part where I tell you what's been going on:
I know: you haven't seen me much around on Blogger lately. It is not that I have been very lazy, or lost interest in the wonderful blogs I used to follow or disappeared from Bloggersphere altogether - not at all!

My absence was due to medical reasons mainly. Unfortunately, I suffer from chronic migraines (cluster headaches, to be specific) that come always accompanied by photophobia which in turn makes it unbearable to fix my eyes on the screen for too long. Therefore, reducing the amount of time I spend in front of the pc helps to ease the strain on my eyes. The medication prescribed by my huisarts (GP or family doctor) has also helped with the splitting headaches, but has given me minor heart problems on the side... so whenever I have an attack I basically wait for it to go away on its own and rest.

In the last month I've been feeling a lot better from my migraines (fingers crossed, knock on wood that they will definitely stay away!) and I thought it was time then to pay a visit to my forgotten blog, "From Argentina to the Netherlands, ..."

Spotted in The Netherlands: The Pro Colour Campaign
Pro Color is a new movement that promotes the use of more colour in every day life, because "... a colourful, pleasant and positive society begins simply with more colours". As they state in in their manifest, they want to put on the agenda those issues that are generally overlooked by politicians and they do this by bringing them to the public's attention with beautiful colours. An example?

I spotted this poster at the bus stop in my neighbourhood and it certainly called my attention: 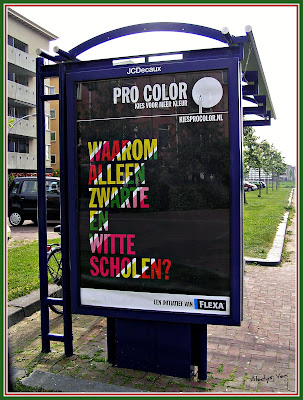 The text in English reads: "why only black and white schools?"

Are there white schools and black schools in The Netherlands? The answer is "yes", though they are not exactly what you might think they are... Let's explain:

The existence of these so called black or white schools is due mainly to the distribution of the population especially in the biggest cities in The Netherlands and not to laws that separate students according to their ethnicity or their nationality.

Many people in this country think that the zwarte en witte scholen (black and white schools) practice is bad to achieve integration and unification within the society. One possible solution would be to help people of non-Dutch origin to spread across the country - but how can this be achieved? Finding work is a major issue that comes into play when people (Dutch or non-Dutch) decide to live in the Randstad or western part of the country ... Another option to make schools more mixed would be the implementation of waiting lists - a solution that does not sound too promising to me, I must say.

If you are currently living in The Netherlands: where you aware of this situation? Do you have an idea of how schools can stop being zwart or wit and become colourful, instead?
Posted by Unknown at 10:32 19 comments