cordobeses, just as we are...

(si prefieres leer esta entrada del blog en español, sigue este enlace)
On occasion of the last elections that took place here in The Netherlands in June last year, the difficulties that had to be overcome in order to form a new Dutch government prompted me to think about my home country and how differently the Dutch and the Argentineans react to events that shape the way we live in. While in Argentina we tend to be more intense and make a big deal out of anything that happens to make the news at the moment, in the Netherlands people mostly listen,  discuss more or less extensively -albeit dispassionately- among family or friends, draw conclusions, and finally go on about their daily business.

I kept thinking about this later and I realised that being passionate and intense is a characteristic that all Argentineans share. We are passionate about politics, about football, about food, about our national heroes. But what about people from my home town -Córdoba- in particular? What are the things that make us stand out from the rest of our countrymen? How can a cordobés be recognised as such by other Argentineans? What are we like?

Funny is the first thing that comes to mind. From the moment we open our mouths to speak, we put a smile on our interlocutor's face, for we speak Spanish with a very particular accent. The melody has a slow cadence that comes from a lengthening of the syllable preceding the stressed one, so that (to give an example that non-Spanish speakers will understand) mi amigo (my friend) becomes miaaaaaaamigo.
Argentineans from other parts of the country try to imitate or even mock us, especially when telling jokes; what they probably don't know is that they don't always succeed in copying our accent. This is mainly because sounding cordobés takes more than just getting the phonetics and the intonation right: it takes a certain cordobés quality. The nature of this cordobés quality is rather complex and a well-kept secret which I am not at a liberty to disclose so publicly...

Well, maybe just a little, or there would be no point at all in writing this post, would it?

Being funny, then, does not just imply speaking in a particular way, enlongating the words in the right place or even using typical cordobés jargon (which we naturally have) but also acting and reacting in a funny way.
Cordobeses have a special ability to make quick, witty and funny remarks in every situation and circumstance of everyday life, whether it is a relaxed moment with friends, while standing in line at the bank or in the middle of a serious and solemn occasion; and the melody with which they make such responses generally makes the remark sound even funnier.

Reflecting on this characteristic of the cordobés quality, I came to think of my own father. My dad is a cordobés through and through. He has a thick cordobés accent that not even living outside Córdoba for most of his yong adult life could take away.
He retired from the navy still young and returned to the Córdoba of his childhood to stay. He has been living now in the same house for the past 29 years and he is very friendly to all of his neighbours and they all seem to like him, too.
He likes talking a lot, so that every morning when he goes out for groceries it will take him at least three hours to be back home, simply because on the way to the supermarket and back, he stops at least a dozen times to talk to the neighbours... usually people he never bothers to mention by their real names to my mum or me when he reports what news he heard from señor R. or how señora M. is doing. As a true cordobés, he is good at making up funny names for every person he knows.
I normally find this habit of his amusing and I even make use myself of those funny names when it is my turn to mention some of the neighbours. These names are not meant to be derogative or uttered in a disrespectful way - it is just a trait that comes with our cordobés genes, I suppose.
My mum, on the other hand, thinks that this habit of his is quite annoying, since she claims to never know who he is really talking about. Surely is not that difficult to call people by their actual names? Why does señor G.  have to be Mr. Fridge-door Egg, or señor S., Mr. Neat Hen?
Well, señor G. seems to spend quite a large portion of the day standing at the door (just where you normally have a place for eggs in the fridge) of his house checking out what is going on in the neighbourhood; he is like the watchman on the street, if you know what I mean.
Then there is Mr. Neat Hen, a man who seems to have a habit that does not provoke the slightest blush on his part when he, (and I can't believe I am telling you this here) "arranges his eggs like a very neat hen would, while he's talking to you," my dad explained the first time he came up with the name. And there is also Mr. Badly-hidden Soldier, who is totally bald, what apparently makes my dad (who was in the military for 30+ years) think of a soldier whose "helmet" you can see, thus, he is unsuccessfully hidden behind the barricades or he has not camouflaged his helmet properly with leaves, like soldiers normally do.
This habit my dad has, has caused me more than one embarrassing moment during my yearly visits to Argentina, when I stay at my parents' house and the neighbours stop me on the street to welcome me back.
They all seem happy to see me again, and they are eager to know if I have had a good flight, how long I will be staying, if I am ok and things like that... I like engaging in small talk with my parents' neighbours -everyone is so friendly and genuinely interested; but I always feel panic seething in my head while I desperately scan my memory to remember the person's real name. After all, despite being a cordobesa myself, it would not be very polite to greet señor S.  with, "Heeeeey, Mr. Neat Hen, long time no see, how's the family doing?", while I try not to notice that he is actually, being neat again... And just for the record, in Argentina people normally kiss when they meet, for example, on the street - never shake hands!
Posted by Unknown at 08:00 22 comments

... with my feet in the IJssel*
(si prefieres leer este post en español, por favor sigue este enlace)
Happy New Year, everyone! I hope you had good fun celebrating New Year's Eve and that you welcomed 2011 in high spirts and good health!

After a lazy brunch on this first day of the year -and the decade-  we decided with my husband to take a short ride along the river IJssel and see what kind of images winter and nature would gift us with. We didn't have to go too far from Zwolle to find a delicious spot near the town of Wijhe.

In comparison to other rivers in the Netherlands, the IJssel is less accessible. Most of the towns and cities by the river have nice sandbeaches, but between one town and the next, it is quite difficult to get close to the water. That is why the Dutch Forestry Commission or Staatsbosbeheer in Dutch,has set up beautiful locations along the IJssel where you can get really close to the water and enjoy the view of the river and its habitat.

There are ten such spots of the Met je Voeten in de IJssel (which means, "with your feet in the IJssel") route and they can be indentified by cute signs like this one:

Riding out of Zwolle, we took the N337 and just 2 km north of the town of Wijhe, we found the parking place for the Buitenwaarden Wijhe, one of the locations set up by the Staatsbosbeheer.

Not knowing what to expect, I first got out of the car on my own, hoping to take a few shots and head back to the car as soon as possible. I first sighted the dijk (dyke):


Then of course, my eyes were drawn towards the sun and the water. The land between the summer and winter dykes get generally flooded at this time of the year and you get your feet definitely in the water if you wander off the marked foot- and cyclepaths:

I found an information board describing the habitat of De Buitenwaarden and discovered a mill in the distance. Could it get more Dutch than this? Educational and bucolic at the same time:

I was truly mesmerised by the effect of the sunlight on the frozen water:

We then moved on a few kilometres down the N337 (the IJsseldijk) and stopped at another spot where it was possible to stroll closeby the water.
The whole area of the IJssel washwaters is one of the richest in bird life and we spotted hundreds of them! 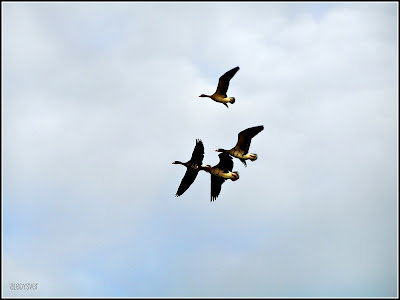 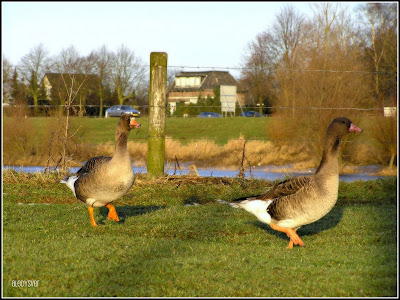 We kept shooting away and enjoying the last moments of sunlight by the IJssel: 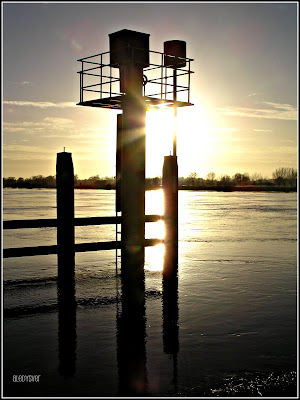 Finally, at around 16:35 of this, the 1st day of the year, and the decade, we took the last shot of this beautiful natural area by the IJssel river - it was time to head back home: