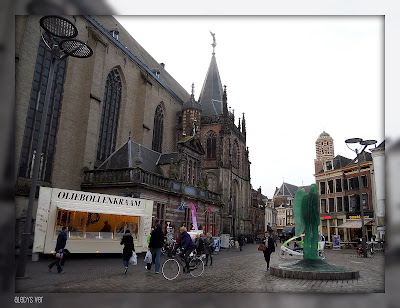 He has been standing there for quite some time now - tall, slim, transparent and green...a bit in the way actually, right in the middle of the Grote Markt in Zwolle.
The first time I saw him I was not particularly charmed by his presence. I hoped with all my heart that he had somehow chosen this particular spot to hang out just temporarily. Just in case, I decided I had to dissuade him, to chase him away.
"Please go away from my beautiful historic square," I said as I walked past him. "Go hang out somewhere else, you do not belong here." He just stared back, his arms lax hanging at his sides, glassy look on his face, impervious to my verbal bullying.

But Michael was there to stay - for good.

Terminator Mike, as I now like to call him -quite afffectionally, actually- came to life by the hand of artist Herman Lamers, from Rotterdam. It is a 3.10m. high glass sculpture of St. Michael, the patron saint and guardian angel of my city, Zwolle. 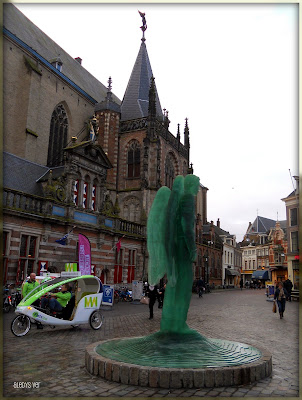 In the year 2005 a group of representatives of the community in Zwolle got together to formulate the outlines for the commission of a new sculpture which was to be erected in the very spot where the city was born - the Grote Markt or main square of the city. More than a hundred artists participated in the pre-selection round carried out by the committee and artist Herman Lamers was finally chosen for the task. In June 2010 the new sculpture depicting St.Michael came to stand in the very heart of the historic city centre of Zwolle.

It cannot have been easy for poor Terminator Mike to stand there in the Grote Markt in those early days; the sculpture did not have  a very warm welcome at first. Many officials from City Hall were not quite happy with the end result and the citizens of the glamorous city of Zwollywood were not instantly charmed by their new  guardian -archangel or not- either. I was one of those un-charmed citizens myself. 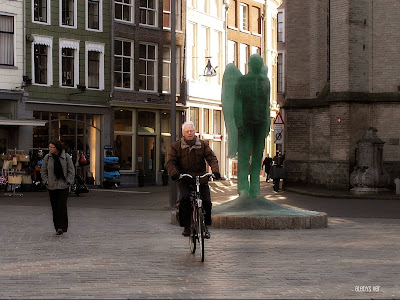 Most of the critics thought that a more classic image should have been used to depict our patron saint, the archangel Michael; you know, like in all those paintings and drawing we have seen of St. Michael brandishing a spear or sword and with a dead dragon at his feet. The warrior angel, guardian of Good against Evil.

Instead, we got Terminator Mike, a modernistic glass figure in transparent green, emerging from a glass pool; rising "like a Terminator", -in the words of the artist himself- to watch over us every day.

Terminator Mike is dressed in a 21st century suit instead of the warrior robes we know from the classic iconography. To many people's surprise, this new version of St. Michael wields no sword or spear to fight evil, like his little brother sitting on the top of the Grote Kerk does. Terminator Mike is apparently a much more peaceful guy. He does have two wings, though, which seem to suffice to protect us, Zwollenaren (citizens of Zwolle), from all things bad.

When did I stop hoping that Terminator Mike would melt back into that glass pool and disappear from the Grote Markt? When did I start accepting the new look of our patron saint wearing what could perfectly be an Armani suit? I cannot really say, but I think that these two people may have had to do with my change of heart. 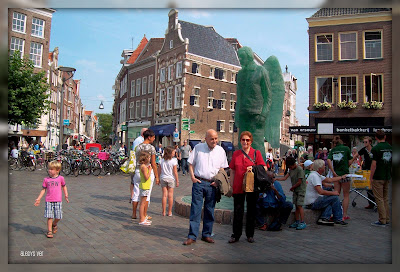 My mum and dad were in Zwollywood for a visit last year and they were both completely delighted with Terminator Mike. So much so, that they wanted their picture taken with Zwollenaar citizen número uno. I had been rather expecting a different reaction from them, something close to, "what, an angel wearing a suit?!" or, "This does not look like Michael the archangel AT ALL!" But no, they were absolutely enamoured by  Terminator Mike for being "so original, so modern, so regular-looking kind of guy".

All of a sudden, I don't mind at all that he has come to Zwolle to stay - for good!