Córdoba: la peatonal - the pedestrian area of the city

Para leer este post en español, sigue este enlace
All the world is a stage, and all the men and women merely players ... goes the saying and this is what I think whenever I am walking down the pedestrian area in Córdoba. If there is a "stage" in this city, a place where you can watch life in all its glory and also in all its .... ingloriousness walk past you, that is in la peatonal.

In Córdoba La peatonal is the commercial district of this busy city. Along calles 9 de julio, Rivera Indarte, or Dean Funes you will come across elegant shopping arcades, big department stores, chain retailers and small boutiques where you can find just about anything you might be looking for - from buttons and ribbons to household appliances and cars. 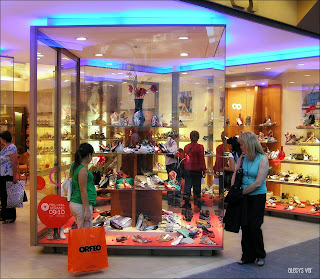 If after doing the round of your favourite shops you feel tired and in need of refreshment, you will also find here many cafés  where you can sit for a while and enjoy some coffee with pastries (try for example café Havanna at Rivera Indarte 73, where they sell the delicious Havanna alfajores) or restaurants where you can have from fast food like the classic carlitos (a toasted ham and cheese sandwich) at the traditional El Quijote Bar (Vélez Sarsfield 73), to a full three course meal at Trattoria Il Gatto (Avenida General Paz 120). 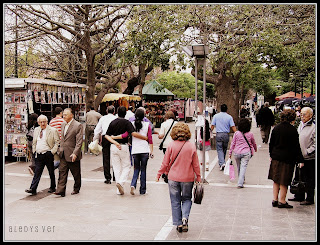 But what makes la peatonal a stage where life flows unhindered -and does it in technicolour, besides- are the cordobeses themselves, who in this part of the city are not simple passers-by but rather become main characters in a big urban play. Young and old, rich and poor, every cordobés has seen part of his or her life take place on this "stage" and everyone has a story or two to tell about it.
As a newly arrived 10-year-old I used to walk around la peatonal with my mum, eyes wide open trying hard to catch it all in: the shops, the buzz of people coming and going, the street vendors selling just about anything: fruit, watches and alarm clocks, pets, football t-shirts and hats, cubanitos and garrapiñada, toys ... a noisy and colourful mix of people, smells and sounds that have stayed with me all these years despite living on the other side of the world. 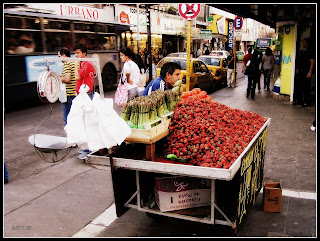 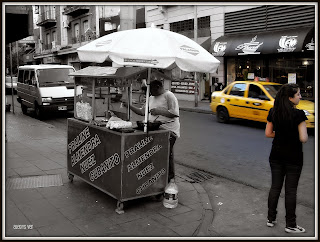 Not much has changed in this part of town. The street vendors with their stalls are still there twenty, thirty years later. They are like fixed characters in this "play"; they have names and a story that, if you walk through la peatonal every day, you end up knowing as if they were part of your own extended family.

But most of these characters from la peatonal that I knew as a little girl disappeared a long time ago, like the trio of little people -two men and a woman, all blind- who used to play traditional Argentinean music and sell lottery tickets in a fixed spot for decades and that everyone used to know as "los cieguitos" (the little blind people).
Another such famous fixed character in the peatonal cordobesa from way before my time, was Jardín Florido, an old man who used to stand at the junction of calles 9 de julio and Rivera Indarte, always wearing a carnation blossom in the buttonhole of his coat. Jardín Florido's role in this urban play used to be that of the galant gentleman who paid compliments to the ladies walking past him in the busy peatonal.

Today la peatonal continues to be the epicentre of Córdoba where people meet, shop and run their errands. It is also the place where school kids hang out between of after classes. As a secondary school student I used to walk around the Peatonal almost every day, so I have lots of memories of this hot spot of my home town.

With my friend Adriana, we used to walk down Obispo Trejo street  after our morning lessons to go to her grandparents' kiosk, situated right next to Paseo de las Flores. We would hang out there, grab something to eat and later head back for school for our afternoon class.

Also on our way to lunch between classes, my friend Marcela would steer me through the throngs of people in la peatonal while I read and translated for her stories like "Rebecca", "Jane Eyre" or "The Lord of the Castle", taking care that I would not trip, fall into a hole or be pushed around too much. At 14 or 15, there is of course no time to waste when your favourite love story has reached a turning point and you have to know what happens next ...never mind that we were walking in the middle of la peatonal during the rush hour!

And even once, with cousin Gloria, we stopped for a while to listen to one of the cieguitos playing a waltz and to our surprise, a man fixing the telephone lines up there on a post, came down and invited us to dance.How we laughed! I don't think that we danced with him but the attiude and friendliness of our galant telecommunications  worker certainly made our day. 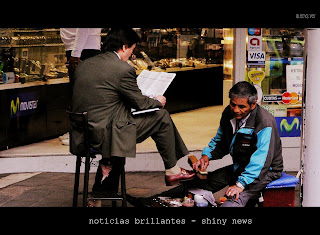 The bustling centre of Córdoba with its peatonal, turns into a lively stage every day of the week with the first lights, when cordobeses by birth and by choice, tourists and travellers passing by the city, start filling up the streets with noise, colour, friendly chatter, music, the call of the vendors from the different stalls. It is never quiet, it is never still, never boring - that is for sure.

Thanks to Claudia Gibson and Andrea Orozco for letting me use their photos here in my blog.
Posted by Unknown at 23:58 13 comments