Our own Elfstedentocht: Stop # 4 Dokkum 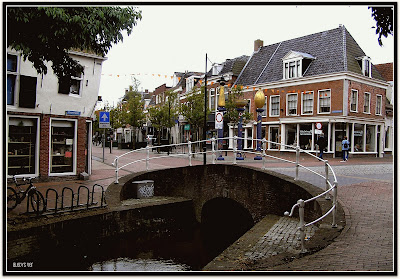 One of the Frisian cities that I intend to visit again next spring or summer is the town of Dokkum, which is the northernmost city in the Netherlands and one of oldest towns in the Elfstedentocht - the famous long-distance skating race that takes place in eleven cities in the province of Friesland.

Closely linked to the city of Dokkum is the name of a saint: Boniface, or as he is known in Dutch, St. Bonifatius. He was a missionary who propagated Christianity in the Frankish Empire and reached what is today the Dutch province of Friesland. It was here in Dokkum in the year 754 where St. Bonifatius suffered martyrdom at the hands of the local inhabitants.
Today,  spread throughout the city, there are reminders of this historical figure, such as the neo-Gothic church of St. Bonifatius -one of the seven that architect Pierre Kuypers built in Friesland. Also, in the outskirts of the town, you can find St. Bonifatiuskapel and well, which is said to have healing powers.


In this well-preserved fortified town, the rich past is still visible. Dokkum had until the 18th century a direct connection to the sea and was for a long time an important harbour.
At the Grootdiep, the former harbour of the city and gateway to the sea, we can still today see the Admiraliteitshuis, vestige of a time when the Admiralty of Groningen and Friesland was housed here and whose purpose was to protect ocean trade. In 1963 the building was converted into a regional museum showing mainly popular regional art, collections of ceramics and textiles from the Golden Age and a very interesting exhibition about St. Boniface, his work and life.


Another interesting building that one should not miss while walking around Dokkum is the exceptional Town Hall, which dates from 1610 and was restored and extended or renewed in the 18th and 19th centuries. The Dokkum old Stadhuis is situated in the Kleindiep, which is also the turning point of the Elfstedentocht race. 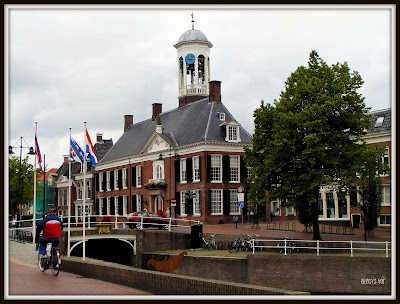 At the local Tourist Information Office or VVV (address and website below) you can find different walking routes which will take you along the most important sights; but you can of course just walk around on your own, rambling along the canals and cute winding lanes or over the bolwerk, which was the old bastion of the city.

Dokkum is also an ideal place to explore the area around this part of the country as well. Northeast Friesland is characterised by charming villages built on man-made mounds - the terp (mound) villages. To the south of the city begins the Frisian Woodland with its special landscape of half-open vistas crisscrossed by hedgerows and to the north and west, the wide open sea mudflats and the Lauwersmeer National Park, a unique area that offers both, protection for the natural habitat and plenty of opportunities for enjoying contact wih nature and water.


You can find my posts about three other Frisian cities here:
Stop # 1: Leeuwaarden
Stop #2: Harlingen

We really have to make it to the North at some point!!!

Ohh you should! You could combine a visit to some of the Frisian cities with a stay in one of the islands, like Terschelling or Almeland... you'd enjoy it!

Although I've not been to Dokkum yet I can say that Frisian is amazing place. I really like it up there :)

You should certainly pay a visit, Stu - you are not too far, besides!

There's so much history in every European town!
My favourite photo is that of the lady tending her garden :)

Yes, I love that photo too! :D

It really does look so charming! I like the Bonifatius Chapel; there's something almost modern about the simple, clean lines and those fantastic arches. The mitre in the square is such an interesting way to mark the route, too.

The Dutch architectural aesthetic really appeals to me. I can imagine how enjoyable it would be just to walk along the streets of this town, gazing at the buildings. And the photo with the woman in her garden is enchanting. :)

Thanks, Katie!
I still find stepped façades really charming - I take millions of photos of them all the time! :D

Yes, the chapel is a modern construction.
The weather was far from ideal to keep walking around that day, but I would've liked to follow the markings related to Bonifatius. I don't know if they're still there, though.

Hello my blog friend!
Greetings from Casa again. Our Sydney holiday was great but too short. :)
I'd love to visit Holland again one day. Dokkum sounds very interesting.
Great post, thanks for sharing!

Glad to see you back, I've just seen your photos of Sydney and they're lovely!
Do come to Holland one day! Despite being a small country, there's a lot to see.
Happy [belated] Women's Day to you, too!

I will if you promise to come to Helsinki!? :)

It most surely is! Now that you'll be back in Fin. I suppose you'll be entincing us, readers, with your posts about beautiful places to visit there, won't you. hehe

Great! We'll 'talk' about this later in the spring...
I'll be very busy the first couple of weeks - moving, cleaning, painting...
I'll shoot Helsinki shots when the weather is good :) I have still a lot to post Sydney images before that...
Have a gooood Sunday!

Yes, I can imagine you having lots to do nowadays! It's not like you're moving house within the same city...
Looking forward to seeing more of your Sydney photos and of course, when they come, the Helsinki ones as well!