Strongly recommended when visiting Córdoba in Argentina, is to take a tour of the Jesuit Block in the city and the Jesuit estancias spread around the province.
The presence of the Order of the Society of Jesus in the Spanish colony during the 17th and 18th centuries marked forever the character and the identity of Córdoba. The Jesuit priests that settled in the Spanish territories in the New World  brought with them not only their religious zeal to spread the Catholic faith among the indigenous people of the land (a practice that may be seen today as objectionable), but they also brought enlightment and progress in the form of the first university they created in the country, and the impulse they gave to the economy of the region through their agricultural and industrial establishments - the estancias.

The Jesuit Block (containing the church of the Society of Jesus, the priests' residence and the Collegium Maximum, later university) together with five of the Jesuit agricultural establishments spread around the province of Córdoba, were declared World Heritage Site in the year 2000 by the UNESCO. 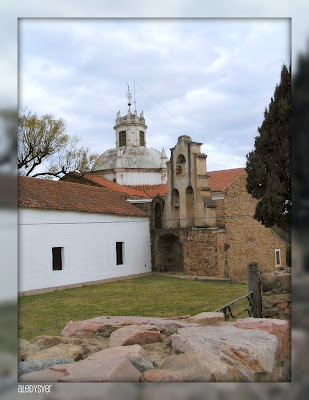 The Jesuit estancias -as the large rural estates are known in Argentina- were mainly agricultural establishments founded by the order to produce the food, the goods and the resources needed to maintain the missions spread throughout the colony as well as the college and university they had founded in the city of Córdoba in 1613.
These estancias today are an excellent example of the fusion of the European and indigeneous cultures and they illustrate an unparalled social, religious and economic experiment that spread over 150 years of Argentinean history and lived on even after the expulsion of the Jesuits in 1767.

Today we take a look at one of the Jesuit estancias, the one in the town of Jesús María, about 50 km from the city of Córdoba. 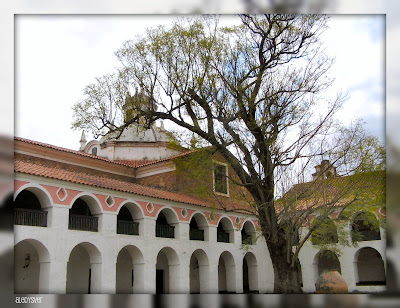 In 1618 the order bought land in the region of Guanasacate, as Jesús María was originally known in the language of the sanavirones, the indigenous people living in what is now the province of Córdoba. The bulk of the goods produced in this agricultural and manufacturing establishment went to maintain the Colegio Máximo, the college founded in 1610 in the city and which was later to become the university of Córdoba.

In the estancia of Jesús María, the priests instructed the natives in many manual crafts like candle and soap making, raising cattle and wine production for which they received a salary. There was also a population of approximately 300 slaves bought in the port of Buenos Aires who did most of the heavy work around the estate, leaving the natives to dedicate to the more specialised crafts.

Wine making was the main activity in Jesús María. In 1618 when the order bought the estate in the province of Córdoba, they also acquired 20.000 grapevines and they started their own wine production.
With an average of 600 cans of lagrimilla -as the wine became known- per year, the Jesuit winery of Jesús María was the first and later the largest wine producer in the viceroyship of the Río de la Plata. Their lagrimilla wine was the first wine produced in the colonies to make it to table of the Spanish king.

The architecture of the monastery/factory/residence complex is an example of the typical construction favoured by the Jesuits and is a fusion of European and indigenous colonial style.
A central courtyard is enclosed on two sides by a two-storey arched gallery that housed the cloister, while the third and fourth side were occupied by a storage building and a high wall. The priests' living quarters and communal rooms were located in the back of the construction.
The natives and the slaves lived in precarious huts spread in the outskirts of the estate, but these were in due time replaced by proper living quarters built of bricks, stones and tiles.
An ingenious compound of lavatories was built in the cloister of the estancia, making it the first construction in the country to have indoor toilets with their own waste disposal system. 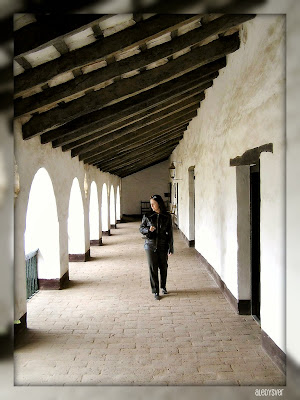 The style of the single nave church is beautiful despite its simplicity; the only adornment of its central cupola is a relief work thought to have been made by native artisans. No picture taking is allowed inside the church, so unfortunately, I cannot offer you a peak into the interior of this jewel of 17th century religious architecture in Córdoba.

After the expulsion of the Jesuits from the colonies in 1767, the estancia of Jesús María (as all the other estates, missions and the university) went into private hands and a long period of decadence and deterioration followed.
During the first half of the 20th century, the national government took charge of the former Jesuit establishments declaring them national monuments and started with the renovation works.  Finally,  the UNESCO gave all the estancias and the Jesuit Block in the city of Córdoba the status of World Heritage Site in 2000.

The estancia of Jesús María houses today the National Jesuit Museum which aims to preserve an important part of the history of Córdoba and the country by recreating the original purpose of the complex. With eighteen exhibition rooms, the permanent collection of the museum includes archeological finds from the northern and central regions of the country, period furnishings and tools, and a very fine collection of 17th and 18th century religious art among other things. Temporary exhibitions as well as concerts, conferences and other cultural events are also periodically held within the ancient walls of the estancia.

In the 150 years that the Jesuits remained in the country they increased their prestige and their power carrying out an important role in the colonial society mainly as educators and entrepreneurs. In Córdoba they founded the first university in the Río de la Plata and one of the most prestigious universities in Latin America.  It is thanks to the university that the city of Córdoba is known still today as La Docta, meaning "the wise" in Spanish.
The estancias they owned were models of industry and progress from their very origins, and many of the activities and crafts introduced by the Order in the 17th and 18th century -like wine making and agriculture- still form the basis of the economy of the region.

The Counter-Reformation-Jesuit style has given the most fabulous pieces of architecture. I had not realized that they were also in Argentina, and the miz of indegeinous and jesuit style again cretae a very unique architecture. It is amazing to think that most vineyards were by the Romans in france and that the Church Of Rome made sure they were maintained, going to the systematical extend of introducing them for producing the mass wine!

huh, what a knowledge bank you are! :)
I'd love to visit Argentina one day. Before that I'll fly to Berlin :)

@DeeBee L.,
Much of what Córdoba is today we have to thank to the presence of the Jesuits with their estancias and their university.
The estancia in Jesús María is the biggest but not he prettiest, I'd say. If you are interested, keep an eye on this series I've started here in the blog, because there's a lot more coming up. The Society's church in the city of Córdoba is very beautiful - you'll see. ;)

Thank you for the detailed history of the Jesuits in Córdoba. I knew of the existence of the estancias, but it was interesting to learn how they played a role in the Jesuits' missionary work. Thanks to you, my list of sights to see in Córdoba is getting very long...

The Jesuits were also very active in the Philadelphia area, and they founded a number of schools and a university (St. Joseph's University). They obviously know good architecture, because most of the university's buildings are lovely--stone construction with lots of character.

By the way, that turkey looks great in the photo, but he'd look even better on my dinner table. haha ;)

@Katie,
The churches at the estancias are not too spectacular though they tend to go towards the Baroque, but colonial baroque. It was too early still to have the materials or the skilled workers to do anything more elaborate. The workforce was mainly made up of the indigenous people of the region.
Doing the Jesuit trail in Córdoba is highly recommended, even if you are not a history nerd. You get to see lovely scenery in the hills and get to know a bit of the past as well.
I had the same thoughts as you did when I was working on that photo of the turkey :)

Que grande La Docta!
I'll probably visit Cordoba often (I hope) after my brother and his family move there sometime soon. These estancias are on my must-see list!

@Ana,
Definitely, you have to visit them; if you don't have time probably you should see La Candelaria and Alta Gracia that are the nicest of all. :)

That place has a very relaxing vibe to it, although (and I hope the Jesuits will forgive me) those buildings make me think of Antonio Banderas, hahaha.

The Jesuits were also able to establish a presence here in the Philippines but not on the same scale as the 'more showy' Dominicans who built our grand churches and universities.

I wish I had more time, when I visit Argentina, to take a tour around these gems our country has to offer!

@titabuds,
haha You're terrible!
The Jesuits were very enterprising people. You're right, the Dominicans were more "showy" in the style of the churches they built, we have one very fine example of that in Córdoba, too.

@Cristina,
Yes, it's a pity you can't stay long enough! I normally stay 2 months in Argentina, my husband just 1 - and we normally do a bit of tourism within the country, especially because they are the "big" holidays in the year for us. There's so much to see and do in our country!

Now when I saw the turkey I thought that it was lucky for him to be in Argentina and not America. He is in the witness protection program.
You are a fountain of information!

@janeduttonutrecht,
Lol!! Yes, I guess he had to flee the country and naturally, he chose Argentina, the beef paradise!! :)

Andi of My Beautiful Adventures said...

Your photos are always amazing Aledys. The taramar in particular is stunning!

We had no idea that the Jesuit legacy was so big in Cordoba! Always learning with you. More and more we want to visit your home town :)
Besos