Last of the tulip days: a visit to Keukenhof Gardens 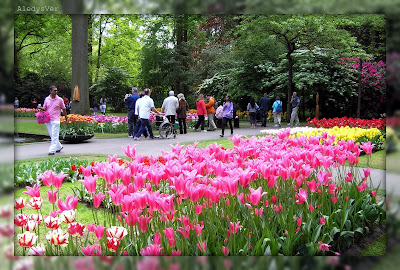 Spring in the Netherlands can be a bit cooler and wetter than in other parts of Europe and we have been having quite a bit of rain and rather low temperatures lately; but despite the unspring-like weather, I just couldn't stay away from the beautiful tulip fields in the Noordoostpolder and I even managed to visit Keukenhof Park a few days ago. 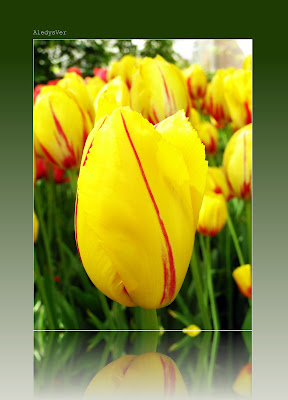 The tulip season is almost over and a week or so ago I got to see the farmers busy chopping off the tulip flowers (a process known as tulpen koppen, in Dtuch) and in some cases, even removing the bulbs from the fields to be sold, exported or stored away.

But even if it's already too late to do the tulip trail either around Lisse, Northwest Friesland or the Northeast polder in Flevoland, there is still time to visit Keukenhof Park, which will be open until Sunday 20 May. If you are visiting in The Netherlands or if you live here and have the time in the next few days, you can still get to see the tulips, though they will probably have passed their days of glory. 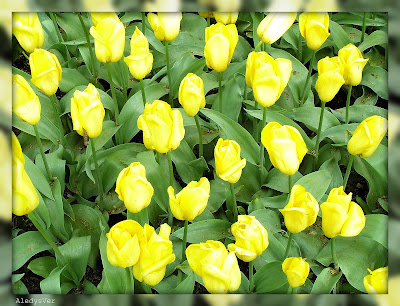 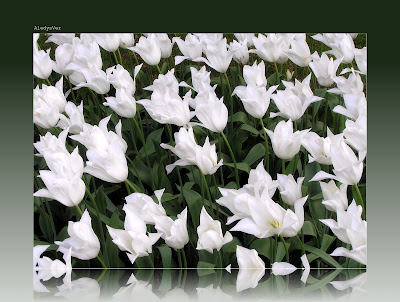 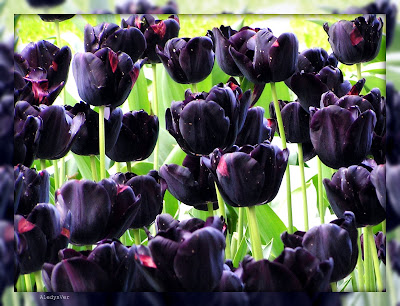 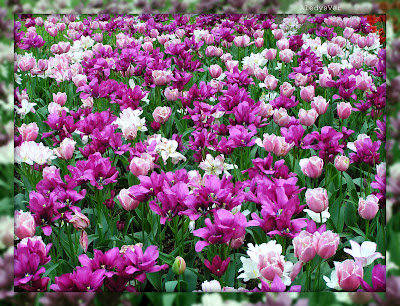 Keukenhof is reputedly the largest flower garden in the whole world, with approximately 7 million bulbs being planted annually in the park which covers an area of 32 hectares and is located in the town of Lisse, in the province of South Holland.

The origin of Keukenhof goes back to the 15th century, when the area belonged to the hunting grounds of the Countess of Hainaut, who also used them to grow the herbs for the kitchens in her castle giving the park the name by which it is still known in our days - "kitchen gardens", which is Dutch is keukenhof.


People having fun at Keukenhof: 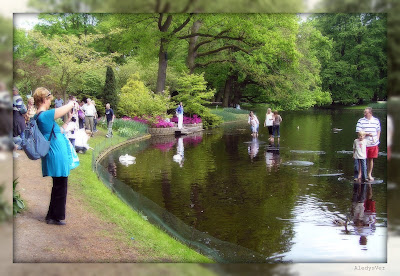 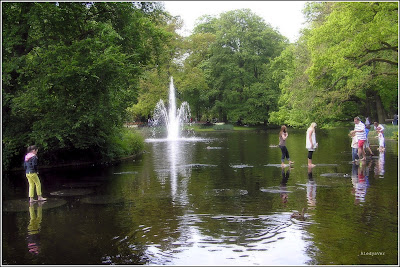 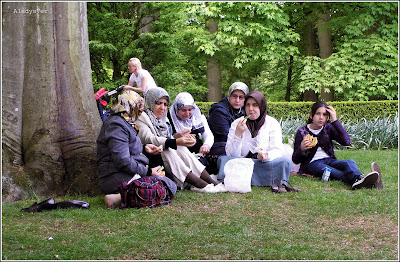 In the 17th century, captain of the Dutch East India Company and governor Adrian Maertenz Block moved to Keukenhof after his retirement and had his country house built there, which became known as Keukenhof Castle. Later in the 19th century, landscape architectect Jan David Zocher and his son were commissioned by the Baron and Baroness of van Palllandt to design the grounds around the castle. The English style of the park designed by Zocher and his son is still predominant in the Keukenhof Park that we see today.

In 1949 the then mayor of the city of Lisse, opened the Keukenhof gardens with the intention of organising a flower exhibition that would attract the bulb growers of the country and Europe and of giving a new impulse to the postwar Dutch industry. 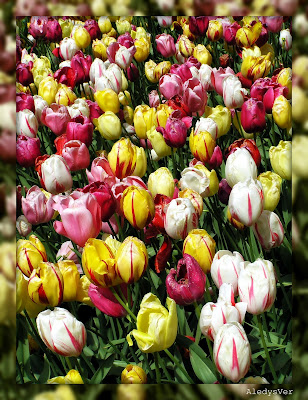 Today, Keukenhof is still the largest flower garden in the world and has been visited by 52 million people since it opened its doors in 1949. Every year there is a incredible amount of work done on the grounds before the opening in the month of March, since around 7 million bulbs are planted and all the grass (a total of around 7000 kilos!), including that under the trees, is replaced.

Besides the 7 million bulbs, in Keukenhof there is a total of 15 km of footpaths and more than 2500 trees of 87 different varieties. Next to the outdoor paths, lakes, bridges and gardens there are four indoor pavilions named after members of the reigning house of the country: the WillemAlexander, the Beatrix, the Juliana and the Oranje Nassau, all displaying exhibitions of different varieties of bulb flowers and spring flowers.
If to all this you add an 1892 windmill, twelve swans that are released in the park for the duration of the exhibition, the seven inspirational gardens, the ibulb nformation pavilion, the restaurants and souvenir shops within the park, you get quite an impressive tourist attraction that should definitely be taken into account if you are visiting The Netherlands during the season! 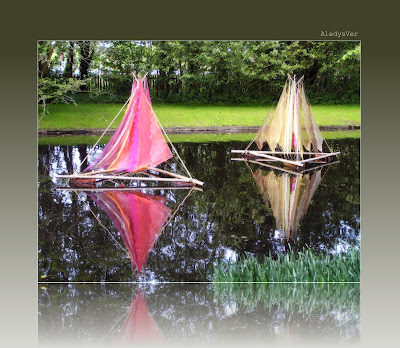 If you are too late for a visit this year, there is still next year - Keukenhof will be open from 21 March to 20 May; so start planning and come to The Netherlands during the tulip season! 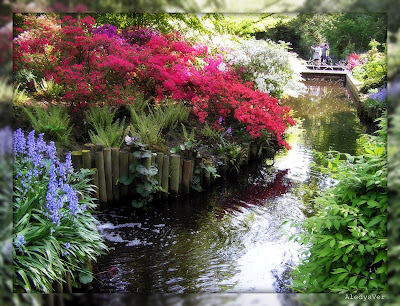 On the website of Keukenhof Gardens you can find all the necessary information to plan your visit and even buy your entrance tickets online.
You can find more information about how the tulip came to be a symbol of the Netherlands in this article I recently posted on Pocket Cultures. In it you will also be able to read about other options to enjoy the tulip season, like the Flower Parade in North/South Holland, the tulip trail in the Northeast Polder and the Hortus Bulborum Garden Museum.
I also posted about the tulip trail in Flevoland in this blog last year.
Posted by Unknown at 20:32

A Touch of Dutch blog said...

What beautiful photos! As always :-)
I love all that you've shared about Keukenhof here too, and it appears it was a lovely day on your visit.

Thanks!! I've taken so many photos of tulips in the past year that I think I could print them and use them as wallpaper in the entire house! :)

While reading this post, I couldn't help but think of my grandfather who was an avid gardener. He always planted tons of tulips and daffodils for the springtime. He never had the opportunity to travel to Europe to see some of the great gardens of the world like those at Versailles or this amazing display at Keukenhof, but he loved to watch travelogues about far-off places. Honestly, if he had visited Keukenhof, I think they would have had a hard time getting him to leave. lol Thanks for this great post, Aledys.

What a beautiful place. (Bucket list!) I would love to do that 'walking on water' thing.

I remember reading some time back that the ultimate dream of some horticulturists is to be able to produce a truly black (not deep blue or darkest purple) tulip. They've fascinated me since. :)

Tulips are among my favouritest flowers. Those photos are incredibly beautiful!

Still stunning!Love tulips...
Just FYIi landed on an Advert when clicking on your comment box...it seems that a few blog have been highjacked by adverts!

@Katie,
I picture you and your grandpa at Keukenhof: you trying to pull him out of the park and him throwing a tantrum like kids when you tell them it's time to go home after a day at the fun fair :) I'm sure he would've loved it here at this time of the year.

@titabuds,
Well, I can assure you that if there's a place where they might come up with that truly black tulip, it's here in the NL! They have a whole museum garden dedicated to experimenting with new cultivars every year.

@Ana,
Thanks a lot! They are beautiful flowers!

@DeeBeeL,
I know, I've noticed it too! I've run my Lavasoft programme a dozen times trying to get rid of it and I don't know what else I can do! I hope they come up with a solution soon at Blogger! :(

Amazing pictures Aledys! Spring in The Netherlands it´s magic with all the tulips :)
Besos

@VagaMundos,
Indeed, it is magic - if only we had the nice weather to match it! :)

Awesome place. We missed it last year. What a pity.